skip to main | skip to sidebar

mummy goes over the rainbow :P 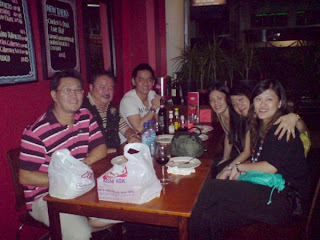 On Sept 4 - the day of mummy's birthday itself, kristie and i were communicating via email at work to decide where the birthday celebration would be. I didnt quite know what suggestions to throw out so it seemed easiest to narrow down the list, rather than begin clutching at straws! According to mummy, there are some rather classy places to dine around bandar putri puchong that we didnt know of before. Anyways we all finally decided to venture someplace nice over there and we ended up in an ever-popular place - Pizza Uno!

Kitty and james did a Houdini while we were being seated and of course mummy wondered where they disappeared to. Kitty actually asked me about the cake arrangements while we were seated in the car with mummy between us! Hehehe...she mouthed the words to me and i went like "oh oh" so she and james shot off to a nearby bakery the moment they got down the car! 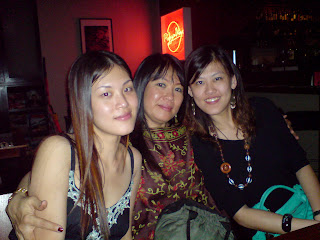 When they got back, we all began ordering...some die-hard favourites, some new choices. The food was awesome as usual, though we lost some confidence in the waiter/owner when he failed to elaborate our choice of appetisers to us. Foie gras, escargot and basil pesto ALL came separately with their servings of warm foccacia loafs! Two of the choices were menu-ed on the walls without pictures, so you would have thought he would explain to us that ALL of them had bread man! Stupid idiot... anyways all was not lost just yet; we didnt have to morph into yeast factories after all! There were braised lamb shanks, aglio olio, steak, oven slow-baked & fried chicken, as well as my seafood paella so slowly but surely we ate through the many many courses! YUMMY...

Luckily papa and mummy were quite stuffed by then, so dessert was out of the question. We signaled the stupid waiter/owner and he marched out with some other waiters singing "happy birthday" to mummy! Mummy was pleased i could tell. Anyways, who doesnt like a little personalised attention?! :) Papa, the usual gala entertainer told us hilarious hokkien jokes while we were having the fluffy tiramisu for dessert and gales of laughter continued long after dessert! It really was much more than your average dinner and cake and im real pleased that all of us - especially the birthday girl, enjoyed herself tremendously.
~ Stay beautifully you, mummy ~
at 11:27:00 am

many laughs in there!